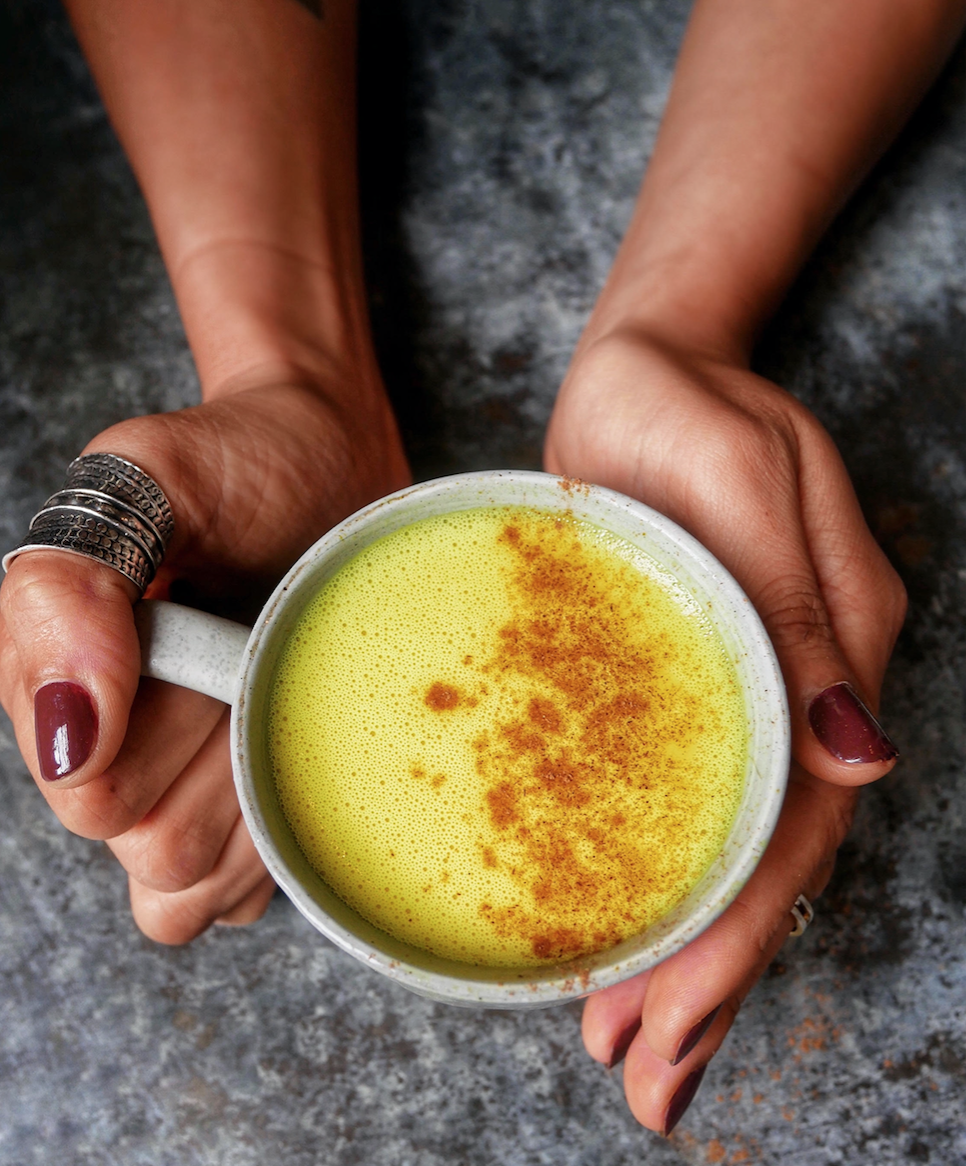 Turmeric is what gives a curry its colour and shine, turmeric is what we turn to when we’re feeling under the weather, turmeric is what we use on a cut to stop the bleeding and heal quicker. Indians also place turmeric at the centre of their masala dabba or circular spice box – it is considered sacred and at the centre of digestion. We use turmeric along with seven other spices in our Golden Chai blend, sweetened with coconut sugar. The blend of spices and sweetness make the turmeric palatable and delicious! Furthermore, pepper goes hand in hand with turmeric in order to make the curcumin bio-available to the body. Pepper contains a compound called piperine, which can help your body absorb curcumin by as much as 2000%, a great way to enhance all the energising properties of golden milk (Goodson. A, 2018).

Curcumin is the most prominent element and the active component of turmeric. It is also what gives the spice its characteristic yellow colour. Curcumin is anti-inflammatory, it is a natural anti-oxidant, it helps prevent chronic illnesses such as rheumatoid arthritis, dementia and other degenerative diseases. However, you do need to be having a significant amount to really reach amounts needed to see these benefits, which is why you might need to turn to curcumin supplements. Read more here. However, adding black pepper every time you used turmeric makes it more bioavailable – see golden milk recipe below.

So here’s some of the wonderful benefits for sleep, boosting immunity, as a medicinal remedy, to treat skin and so much more.

Research has found that even a small amount of curcumin (90mgs twice a day) in your diet can significantly boost your brain function, memory and attention (UCLA, 2018). Curcumin has also been found to help boost your mood and alleviate symptoms of depression. In fact, a study conducted in 2014 found that curcumin was more effective in the long-term at treating depression than placebo (Lopresti et al, 2014).

Turmeric and curcumin have both been found to regulate blood sugar levels and other health related issues associated with diabetes. A study looking into the effectiveness of curcumin on diabetes, conducted in 2012, found that out of the 124 pre-diabetic subjects treated with curcumin, none developed diabetes, whereas 19 out of 116 people who were given the placebo did in fact go on to develop diabetes (Chuengsamarn. S, et al, 2012)

The anti-inflammatory active compound in turmeric called curcumin inhibits molecules that cause inflammation in the body, in turn helping to boost immunity. Inflammation in the body is associated with chronic diseases such as heart disease, Alzheimer’s, cancer and diabetes. Its antioxidant properties help to prevent free-radical damage.

Golden milk has become quite the trend, something that has been used in Ayurvedic medicine for at least 6000 years (Rathaur. P, et al, 2012). The combination of turmeric and milk is said to be incredibly nourishing for the body and is often recommended just before bed. Golden milk not only helps sleep deprivation and improve sleep quality but is also a lovely ritual to incorporate into your evening routine (Kumar. A, Singh. A, 2008).

In Mira’s second book Prajnā, she writes about the importance of sleep and explore different rituals that may help improve your sleep quality. In Ayurveda, sleep is considered to be one of the 3 pillars of health and wellbeing, alongside food and exercise. Sleep gives our muscles and cells time to repair, helps replenish our immune system and can have a significant impact on our mental and physical wellbeing. Using rituals such as journalling or preparing golden milk each evening, is a great way to create the best environment to improve the quality of your sleep. If you have difficulty falling asleep, add a pinch of saffron and nutmeg to your golden milk.

Simply stir a tablespoon of our Golden Chai blend into boiling hot milk (any milk), let it cool a little and sip – any time of day!

Boil together:
1 mug of milk – any milk you like
½ teaspoon turmeric powder
pinch of black pepper

Additional options:
1 teaspoon grated ginger or ¼ teaspoon ginger power
pinch of cinnamon if you like
Both these spices are anti-inflammatory, aid digestion and cinnamon is great for adding a touch of sweetness.
If you need it a little more sweet, then stir in some jaggery, honey or brown sugar.

This honey and turmeric paste is great for children, especially in the colder months, something my grandmother and mother would always make for us. Stir together 1 teaspoon of turmeric in 2 tablespoons of honey and eat directly with a spoon or stir it into water. Add a small pinch of black pepper into this paste if it’s not for children. If you love spreading honey on toast, adding turmeric to this will give it an extra boost.

FREE SHIPPING on all orders in the UK!